On May 27th, I’ve finished The stupidest game on Facebook. I was silently running this little self-amusing game since the 15th of May and then, later on, opened the process publicly. In the end, it took me less than 15 days to fill up to 99 the most famous 3 icons that you find on the top right corner of Facebook… on a desktop browser.

So that’s what it looks like. No cheating. No Css rewriting. No photoshopping. And as a proof, I was screen grabbing the page every 2 hours from the mobile version of Facebook. (Actually, I did not set that up for this project specifically. It is a part of my LoveMachine project, which has been running for more than a year now: I take a screenshot of Facebook every time the bot runs, mostly for debugging.)

So today, I looked for the first time at all these screenshots and especially the ones corresponding to this period and to my surprise, I’ve found out that the stupid game does not work at all on the mobile version of Facebook. If the highest score on desktop is clearly 99, I have no idea what the limits are on mobile. (On the top of this page, you can see the gif created from all the screenshots.)

This is of course very disappointing. It makes the game a little useless, or at least, not multi-platform, as games should be these days.

Anyway, I guess that closes the challenge. I have other plans for the monster than trying to reach 999 or whatever the limit is on mobile. If any of you is up for the mobile challenge, please drop me a line. I’d be interested to see your results.

As a happy note, and to close this chapter, I found out that when the score of unread private messages reaches 99+ in the desktop browser, it resets the counter by itself. Which, to me, is obviously a bug. So, as a joke, I posted a status about it and tagged the Facebook Design team in it. 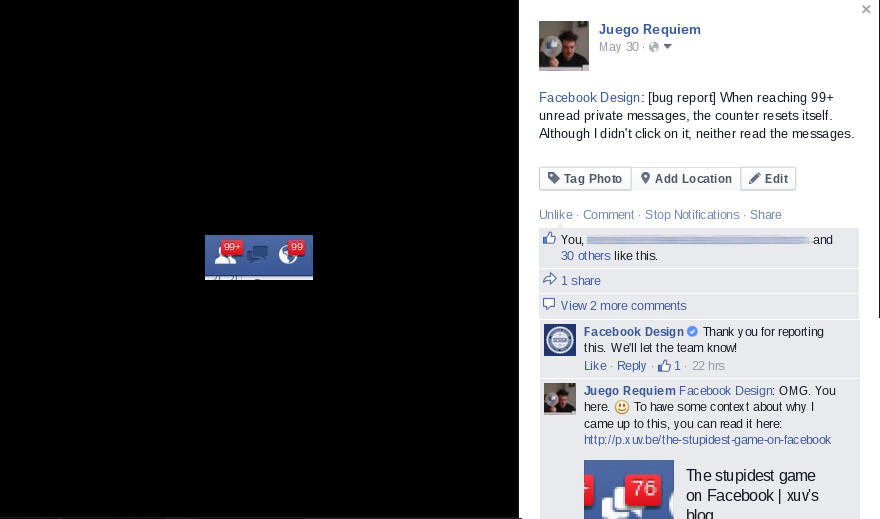