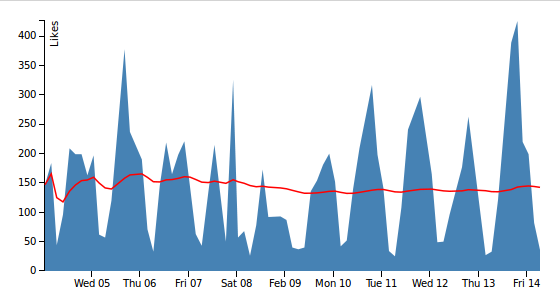 Exactly 10 days after the official launch of the [loveMachine], I thought I might give you a little data feedback of the project.

Yes, the graphic displayed here, is the real one (made with 3d.js). As you can see, I’m running the script every 3 hours or so and the number of likes varies, going from around 30 to 400 each time I run it. It obviously follows a pattern related to daylight or activity hours. Right now, because most of my friends live in Europe, there’s more content to like during the day than in the middle of the night. The red line indicates the average number of likes done each run (~150). The way the [loveMachine] is written, it’s never going to go beyond 500 likes in one go. I have to stop the script and log out or Facebook will send me warning messages about disabling some features. If you do the math, I’m around 1200 likes a day (on posts and comments. It is not liking pages or ads). A way to increase this number would be to run the script more often during daytime. But for now and until the end of this month, I’ll keep it like this.

Other numbers not shown in the graphic but of great interest, is my friends and followers count. In 10 days, I’ve received 26 new friend requests (that I have of course all accepted) and gained 4 new followers. This is almost as much as the number on friends I gained over the last year. Do I have to mention that these latest 26 friends request were not initiated by me, and that I don’t know any of these people. There’s a lot that could be said about that and the reasons that brought them in my friendship circle. But I’ll only say this:

The more you give love, the more love you get back.